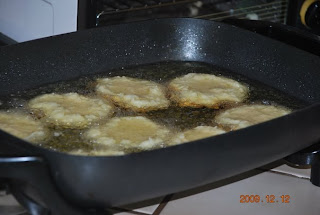 If there was a Tamara's Greatest Hits album, this story would be on it.  Luckily for all of you no such album exists.  Learning to Make Latkes is a funny little story - and more like a personal essay than anything I've done since my teenage years as an essayist for Weekend Edition Sunday.  Here's the audio from the version of the piece that aired on The California Report:


The story was also featured on the NPR Holiday Favorites album.

This may be the ultimate parable of Jewish cooking tradition. Growing up Methodist in a small, central valley town, my first introduction to latkes was through my college boyfriend, Ira, when I went to visit him at his parent’s house in L.A. during Hanukkah.  The whole house had this distinctive scent of grease and potatoes – and it was sort of fishy.  The potato pancakes Ira’s mom and sister made were terrific.  They were crispy and warm and dunked in apple sauce for that perfect balance of grease and fruit. 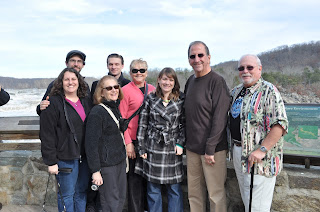 So, Ira and I kept dating (for like a decade) and in 2006 got married.  Over the years, I’ve tried making him some traditional Jewish foods -- dishes he remembers from his childhood.  But I’ve basically screwed everything up.  I put dill in the matzo ball soup (big mistake), and my matzo balls were fluffy in stark contrast to what his mom makes.  And my brisket, while quite tasty, is nothing like his mom’s.  So several years ago I asked for her latke recipe.  She photocopied it from a small paperback cookbook, and I followed the recipe exactly, more than once.  But my latkes also were a dud.  They were like over crispy little hash browns.  I gave up and started using Manishewitz latkes in a box -- which is essentially admitting defeat.

Then my friends at The California Report convinced me that I should do a story about celebrating Hanukkah as a newly converted Jew.  For me, Hanukkah is all about latkes, even if I make them using a mix.  But with my in-laws coming to town, I decided this little radio story would be a perfect excuse to actually learn how to make the family recipe.


So there we were in my kitchen, my expert latke-making mother-in-law (Andrea) and sister-in-law (Shannon) and me.  I pulled out the recipe and put it on the kitchen counter.  I might as well have left it hidden away in my recipe binder, because they hardly used it!  Instead, they kept referring to what we were making as “Poppy’s latkes.”  Poppy was the patriarch of the family (my mother-in-law’s grandfather) who continued making latkes well into his senior years.  The secrets of Poppy’s latkes are lots of oil in the frying pan and the perfect mixture of shredded potatoes and mushy potatoes.

Clearly, following the printed recipe all those years was setting me up for failure.  The real recipe is in the nuances passed from generation to generation.  Here’s the recipe as close I can recall it.  It contains elements from Sara Kasdan’s cookbook “Love and Knishes,” but has been modified over the years by Ira's mother and sister working under heavy influence from Poppy's latke-making tradition.

Put potatoes and onions in a food processor (exact quantity is up for interpretation).  Ideally your food processor will have both a grate and a chop blade running at the same time.  Otherwise grate, then chop until the latkes reach the appropriate mixture of mush and shred.  Add a little lemon juice to the mixture so the potatoes won't change colors.  Push the mixture into a strainer removing the excess moisture.  Add flour and eggs until it looks right.  Don't put in too much salt because people are on low sodium diets these days.

Cook the latkes in vegetable oil about a half inch deep in the pan.  Really, there's no such thing as too much oil.  It is best if the latkes float in the oil just a little but aren't fully submerged.  Cook until they are quite crispy.  You're aiming for brown, not golden brown.

Sara Kasdan adds in her book: “Note:  This recipe should serve 4-6 people, but when some people see potato latkes they act like they haven't eaten for a week.  They will want to make from latkes alone a meal.  When you have people who enjoy so much, you won't mind grating potatoes all day long."
Posted by Tamara at 2:21 AM