When I came through the door of the Hanford Sentinel and said I wanted to write a column, the editor I spoke with agreed to let me try it out.  I'm pretty sure he figured he was signing up for a one off deal.  I had different ideas.  So, a couple of days after my first column ran, I sent him another one.  This one charted the course for weeks of columns to come.  Basically I used this column to tell the paper and the readers they'd be hearing from me weekly.  Amazingly, the Sentinel published it too...and another 28 after that. 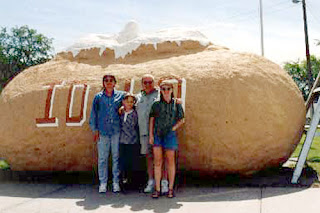 
Chevy Chase did it. So have the guys from Easy Rider (a cult turned main stream film that came out in the 60’s. It starred Dennis Hopper, Jack Nicholson, and Peter Fonda.). But it somehow seems different with my family. The great American family vacation can be a pretty scary thought. Movies like National Lampoon’s Family Vacation, Lost In America or Easy Rider have glamorized the idea of crossing America in (or on) a motor vehicle.


For the next six weeks I will be putting up with my little brother, motion sickness, unfriendly locals, and strange insects (I’ve heard Texas has some really huge misquotes) all on the quest to find America, or what’s left of it.
Are there places in our country where the true spirit of America is still alive? I certainly hope so. However, could it be possible that the history books and folk tales have created an America that never really existed. I’d probably be more likely to find “America” in Euro Disney than in our nation’s capitol. Washington, DC’s beautiful statues and government buildings are now marred by security guards and “no parking” zones (to prevent car bombs). Maybe America isn’t the wholesome Mecca that we want it to be.


This vacation (if you can call it that) will include visits to all the major tourist attractions across the country (Mt. Rushmore, Niagara Falls, the Statue of Liberty, plus the Washington, DC experience). However, it will also include several non-traditional (and non-educational) stops. We will be traveling to all of the 6 Flags Theme Parks in the U.S. Great! We’ll sit in the car for 5 hours (at least), and then stand in line for 2 hours just to go on a 30 second ride. Oh well, it sounds a little better than searching for the headstones of my dead ancestors in all the nation’s graveyards (I have a friend that actually had to do that with her parents).


This trip is just another episode in my father’s ongoing mid-life crisis. So far he has bought a motorcycle (that’s too powerful), hundreds of CD’s (he already has them on vinyl), and now he’s planned a forced march across the country in a Lumina mini-van. 30 years ago he went on a trip around the country and now that my brother and I are old enough to “appreciate it”, he plans to give us the same experience. It seems that my father has roped us into his most recent nostalgia trip.


As my father searches for the fountain of youth somewhere in America, I am forced to become a pre-teen again. At least as far as hotels and restaurants are concerned I’m still 12. I wonder what they’ll think if they see me drive up in the family van.


While writing this column I was handed the latest itinerary “update.” It is 4 pages long and filled with dates, times, confirmation numbers, and little descriptions like “...scenic drive to Chicago” or “after having fun....” This booklet of mandated enjoyable activities has the title “Trek Around America 1995” plastered (in 24 pt. bold Star Trek font) across the top. I Should never have said that there is nothing to do, because the way my schedule is filled with “interesting experiences” I won’t have time to just do nothing this summer.


Before I let my negative expectations run away with me let me establish the fact that I really will have a good time and learn something...I think. The next time you hear from me I will be “on the road” while each member of my family will be “in search of” something different. Mom will be looking for the holistic herbal cure to claustrophobia. Peter Pan, I mean Dad’s quest is for the hair he lost on his last trip across the country. My brother is looking for the happy medium between junk food and gravity defying rides. For me, I would be thrilled to get a look at the Mtv studios, meet Betsey Johnson in her design studio, check out some colleges without “C” in their initials, and try to get some career advice from anyone on the staff at NPR. Well, sitting in the back seat of the “Yuppie Van” that’s my view from Generation neXt.
Posted by Tamara at 9:51 PM